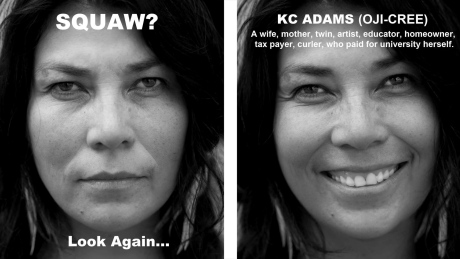 I am feeling much more the Edmontonian these days: as the disappointment of the Scottish Referendum begins to fade, the early, hopeful days of a new government here in Alberta begins to inform and lead my consciousness. It's not that I no longer care about the passions of my Glaswegian pals, but that the hearts and minds that I encounter these days are engaged in other conditions. With that said, those 'other conditions' are rooted in the same struggle in Scotland. If you watch the play, The Cheviot, the Stag, and the Black Black Oil as performed by the theatre troupe 7:84 you might see what I mean. I have always really admired how this troupe engaged its audience, who were actually the subjects of the play, even though they may not have known this at first. The performance of the audience becomes an essential part of the play - the lines between performance and action, audience and actors, and the play and the conditions of its participants, become blurred. I'll make a bold statement and say that this is what Art at its best can do.

Recently in Edmonton there has been a very impassioned social media discussion in the arts community. At its heart this discussion questions the use (exploitation?) of Aboriginal ideas, images, and experiences by non-Aboriginal people, and relates how this practice is used as a tool to further Colonial control. It is a good question and it needs to be asked, especially because Colonial control in this case leads directly to practices that can only be understood as genocidal. Posing this question forced many people in the Edmonton arts scene to assess their position in these practices because we all participate in them whether we want to or not, whether we are even aware of our positions or not. Responses to this discussion have been angry, confused, defensive, heart-breaking-and-broken, and celebratory - I responded in all of these ways as I read about and discussed the positions that arose.

Throughout my life I have been aware of inequality, that there are some folks who have more than they will ever need and those who go without. Much too often the explanation for this inequality comes from white male figures of authority and rests on race, gender, and ability - those who do not have what they need are in that position due to weaknesses inherent in their biology, and those who have succeeded have done so through hard work and intelligence. The proof is in the pudding (in this case vanilla pudding); successful people are overwhelmingly white males. The natural superiority of white males should have made sense to me but it didn't; the more people I met and voices that I encountered, the more I realised that what people have in common is more significant than what sets us apart from each other, and that reported differences, strengths, and weaknesses are overwhelmingly exaggerated or fictional.

While attending university I tried to understand this contradiction in my experience through studying Political Economy. These studies left me with no doubt that economic disparities are created and maintained by those who benefit from them - that economic disparities are not the product of in-born superiority or weakness. While my studies in university were very important in shaping how I see the world, late in my bachelors degree I began to feel that many voices and ears were being excluded in the academic world. I began to feel that I was actually re-enforcing inequality through my engagement in academics - that university environments are overwhelmingly represented by middle and upper class males and are significantly isolated from the communities that contain them.  I also found that the academic approach did not fully express what I was experiencing and that lyrical and musical means of this expression felt more genuine. At the end of my degree I needed to make an important decision – continue along the path of Academia or find another forum of expression. I decided that writing and performing music gave me the opportunity to explore and share my personal and political observations through a more far reaching and inclusive medium than can be found in academic circles. I have been generally content with this position but every once and a while I get shook - the recent debate in some Edmonton Arts circles has shaken me. Here the argument has been made that the conditions I saw in academic circles that limit and control minority participation are just as active in non-academic artistic circles.

Does the art world (the world in general) need yet another white male voice representing non-white male perspectives? Is an ally sometimes not an ally despite their best intentions? I try to sidestep these questions by approaching my role as a songwriter/musician not as a spokesperson or ally but as that of a witness - but even here I am at times uncertain of the value of this. I recently took a walk through Glenbow Museum in Calgary where I encountered two brilliant exhibitions: the first was, Edward S. Curtis: One Hundred Masterworks, that contained a collection of photographs of First Nations People from across the Americas in the late 19th and early 20th centuries. The second was, First Person: Contemporary Indigenous Portraiture, where, among many other inspiring and heartbreaking works, I encountered a series of photo portraits by KC Adams that challenged perceptions of First Nations People by asking what we saw in the photo; welfare recipient or mother, student, artist; terrorist or father, teacher, lover; victim or grandmother, author, homeowner - these aren't the exact details but will be enough to give you the idea.

These exhibits gave me great pause - while the work Edward S. Curtis was beautiful to look at, there seemed to me to be a fair bit of posing and dressup involved - maybe I'm wrong about this but it did appear that way - Curtis' portraits felt romantic and ill-informed to me. The work of KC Adams made me really think about my voice and perspective when chiming in on issues that affect the lives of First Nations People throughout the Americas - am I simply reinforcing stereotypes through what is obviously an ill-informed (read: not the perceptions of a First Nations person) though well-meaning perspective? Likely, but I hope any feedback that I might receive helps me to become less ill-informed and opens the arms of my perspective.