Well that was fun. I'm just back from down south Alberta where I played some shows in Calgary and Canmore with Kimberley MacGregor - sure did feel nice to get outta town and meet some new folks. Everywhere we went we were greeted with excellent hosp-o-tal-ity. I haven't been to Calgary - other than through it - for some years now but it seems to have held on to some great traditions while introducing some nice new spots in my absence. 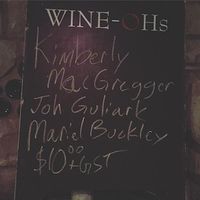 Kimberley and I played first at Wine-Ohs along with Mariel Buckley - this was a real sweet little space and despite adventurous spelling some we all had a great time telling stories and singing songs to an attentive audience of friends and strangers. We played this show 'in the round' where each of us took a turn playing a solo acoustic song - I sure do love this performance approach mostly because I get the best seat in the house to not only enjoy the other performers but also to observe the audience. I have been lucky to be in the audience at a few Kimberley MacGregor shows but to watch and hear her belt it out into the next county from just a few feet beside me is a pleasure few get to witness. It was my first time seeing Mariel perform and she sure was a treat - an absolutely beautiful songwriter, engaging performer, and all-round all-star - I'm positive our paths will cross again soon.

Mike Dunn was generous in giving me a lift here and there will all my stuff and offering me a place to crash for a couple nights that even included breakfast, and all this despite his early morning excursions into the working world. I had Friday off to take a leisurely stumble around Calgary before settling into The Palomino Smokehouse to help Mike celebrate his birthday. Big time bonus was that HighKicks tore me some new ears and I got to have a wee chat with Matt Doherty who I hadn't seen since meeting him last fall in Banff.  I am pretty sure we had a very good night - I know I met some good folks. The next day we arose quite relatively early and headed off to The Ship and Anchor to attend the open stage - I think it's almost 20 that I was last there and it sure was good to spend a lazy afternoon listening to all the talent in that room including my old pal Kent McAlister.

Kimberley and I then headed up the road to Canmore where we enjoyed the amazing hospitality of Holly Dawson while hosting an Open Stage at The Last Call and then playing a house concert at Holly's home the next day. Folks sure did treat us well and we met so many good people from the local music scene and wider community. I am really enjoying playing house concerts - performing in someone's home breaks down some of the barriers between performer and audience and I had some really nice chats after our performances.

This was just a mini tour tune up for next week when Kimberley and I will be joined by Levi Cuss and Curtis Phagoo for a 7 night, 7 show Alberta and southern BC swing from Feb 1st until the 7th. More on that later.